In this section, we summarise the History of Kingsland; in other History sub-menus are highlighted some old quotes/traditions of the village, lists of some of the old Trades which were practised in the village, and a list of bibliographies/links for further research. There are also special sections (Railway Reminiscences and Memories from the Past) kindly provided by a keen supporter of this website.

What makes Kingsland – this relatively small area at the “quiet end” of one of England’s least populated counties – even worth reading about ?  Forty minutes from any modern motorway, miles from the “big city”, Kingsland should not really have a lot to say for itself.

However, when you scratch the surface, you scratch the surface of Britain’s history. From Saxons and Romans, knights and castles to Olympic medal winners, sporting heroes and even an Arctic Explorer, Kingsland has had more than its fair share of interesting events and characters. These pages hopefully give you an insight into the village’s past and will trigger you into exploring further.

In the Ice Age a huge glacier travelled across the country through Shobdon, and when it reached Mortimer’s Cross an enormous tongue of ice curled up round the Aymestry Valley forming a large lake at Wigmore and completely damming the River Lugg.

There is then an enormous gap in history, while the receding ice and snow were replaced by warmer conditions and life became possible. The first colonisation of the district was probably 2000 years before the birth of Christ, when the Celts began to invade England from Germany.

After another lapse of some 2000 years, traces of the early Britons can be found everywhere around the district. Ambresius and Caractacus left fortifications behind them – eg Croft Ambrey and Shobdon.

The Romans next occupied Herefordshire and had military stations at Kenchester and Leintwardine. They made considerable use of the district as their main road – Watling Street – ran through Stretford, Street Court, over the Pinsley (where the remains of their ford can still be seen), along Hereford Lane, and up through Aymestry to Leintwardine. Street Court is undoubtedly built upon Roman foundations and the hamlet of Street itself is named after Watling Street.

In Saxon times, there was certainly a church in Kingsland, practically upon the same spot as the one today. As there was a church, there must have been a village around it with most of the dwellings being built of daub and wattle, and thatched with reeds. The area was then much more wooded and there was a great deal of bog and marsh.

Merowald, King of Mercia, was keenly interested in Kingsland and excluded the Parish from annual charges. Hence the name “Kings-lene”, our modern Kingsland.

The Motte and Bailey by the church is the site of a strong Saxon stockade (the Motte was the mound on top of which was a Keep, the Bailey the wooden palisade within it). When danger threatened, as often happened being so near the Welsh border, the defenders – after driving their stock into the outer enclosure – would retire to the inner one. The two moats, being much broader and deeper at that time, were flooded from the adjacent Prill.

Kingsland castle is a Scheduled Ancient Monument and in August 2016 the area covered by the designation was expanded. You can see more details of the new designation and the castle’s history via the four documents linked here: Press Release: Historic England Report: Map of Designated Area: Notification of Designation. You can also see this  link for further details of the Motte & Bailey

The Domesday Book (1085) shows that the central plain of Herefordshire (including Kingsland) was well settled and the whole area was extremely fertile. Kingsland has a reliable water supply, a dry settlement site and a light, easily worked soil.

Kingsland was a Royal Manor in the reign of Edward I (1272 – 1307) and the Queen granted it a charter to hold a weekly market and an annual fair. In 1290 construction of the present day church was started with the help of Edmund Mortimer. 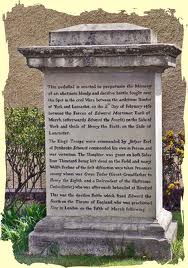 In February 1461, the misgovernment of the country led to the Battle of Mortimer’s Cross between the Yorkists, led by Edward of March, and the Royalists. See link to BBC web for further details of this important battle. It took place on and around the Great West Field, just to the south of Mortimer’s Cross and some 4000 men were killed during the fighting. There is a Monument to the battle at the end of North Road in Kingsland, opposite the Luctonians Rugby ground.

The wording on the stone reads:

This pedestal is erected to perpetuate the memory | of an obstinate bloody and decisive battle fought near | this Spot in the civil Wars between the ambitious Houses | of York and Lancaster, on the 2nd Day of February 1464 | between the Forces of Edward Mortimer, Earl of March, (afterwards Edward the Fourth) on the Side of Lancaster. | The Kings Troops were commanded by Joseph Earl | of Pembroke. Edward commanded his own in Person and | was victorious. The Slaughter was great on both Sides | Four Thousand being left dead on the Field and many | Welsh Persons of the first distinction were taken Prisoners | among whom was Owen Tudor (Great-Grandfather to | Henry the Eighth and a Descendent of the illustrious | Cadwallader) who was afterwards beheaded at Hereford. | This was the decisive Battle which fixed Edward the | Fourth on the Throne of England who was proclaimed | King in London on the First of March following.

However, the inscription gives the date of the battle as 2nd February 1464 when in fact it took place in Feb 1461 – just goes to show that you can’t believe everything that is set in stone!

Nothing more is known of Kingsland until 1553 when the inhabitants supported Princess Mary against Lady Jane Grey. 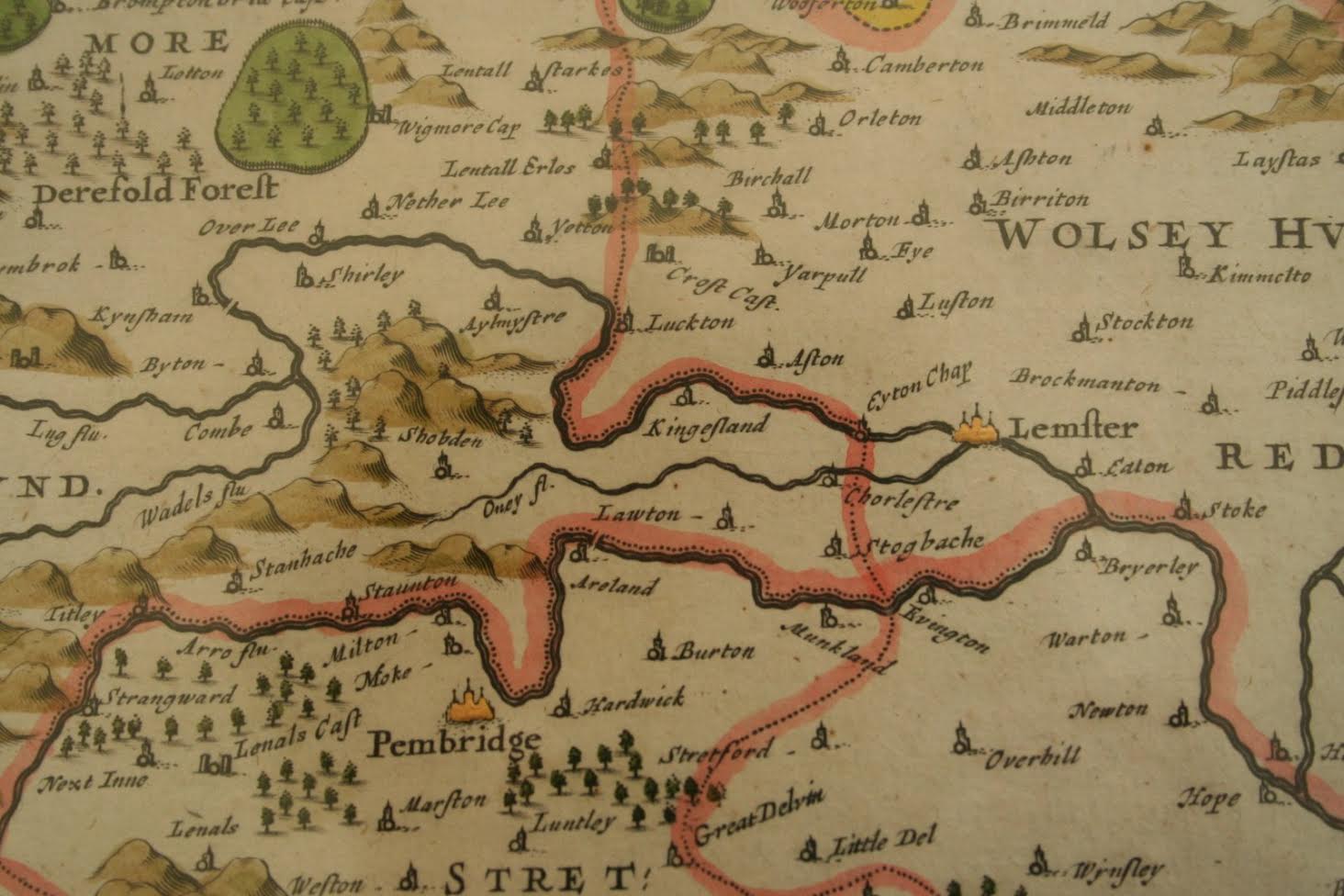 In about 1700, the worst feature of the district was the state of the roads. The old coaching road from London to Aberystwyth, which passed through Kingsland, was kept in rough repair – but elsewhere the surfaces were deep, ruts and filled with water all winter. In 1827, however, Macadam succeeded in bringing into general use a system of mending roads with broken stone, and of making their surfaces convex to help drainage. Toll Gates were installed to pay for this work; in Kingsland the toll gate was some 200 yards north of the old railway station with others at Arrow Green and near to Mortimer’s Cross. The old coaching road, after leaving Leominster, came through Cobnash, over the Pinsley at the railway station, and along Hereford Lane to Mortimer’s Cross. The journey from Aberystwyth to London took some 24 hours.

In about 1792 a scheme was started to run a canal from Kington, via Kingsland and Leominster, to the Severn near Stourport. Difficulties meant that the work was abandoned less than half way through ! See link for further details of the Leominster Canal

The steam locomotive was then arriving. The line between Kington and Leominster was commenced in 1854 and was opened in 1857. It remained in use for passenger transport until 1955, and for freight for another 9 years. The last train ran on the line in September 1964. On this web, see the Photo Gallery and Railway Reminiscences . Or click here for more details of railway line.

During this time, it was said that Kingsland was a neat and tidy village with the houses tastefully decorated with Jasmine and Grape Vines. The vines have gone but Vine House and Vine Cottage remain. There also remain many half-timbered houses, but their thatch has been replaced by tiles or slates. The Old Workhouse, now three dwellings, is 16th or early 17th Century. The Old House, built between 1520-1560, was probably an “H” shaped house with wall paintings and paintings on the beams.

The oldest houses in the village are Must Mill, Black Hall (partly 14th Century), Angel House and Croft Mead.

Throughout these years, agriculture was of major importance to Kingsland and this demanded a wide range of supporting trades (see Old Trades sub-menu ). In the second World War, hundreds of acres of land between Brock Bridge and Pembridge were drained, removing sedges and bog weeds and enabling the land to be farmed.  Agriculture is still of importance to the village – although with the advent of world-wide markets and improved logistics – many of the Old Trades have disappeared from the Parish.

And while we are talking of the Village History, please see the old poem about the village (price 1d) which was written for an Eisteddford. (Click the picture for a bigger version) 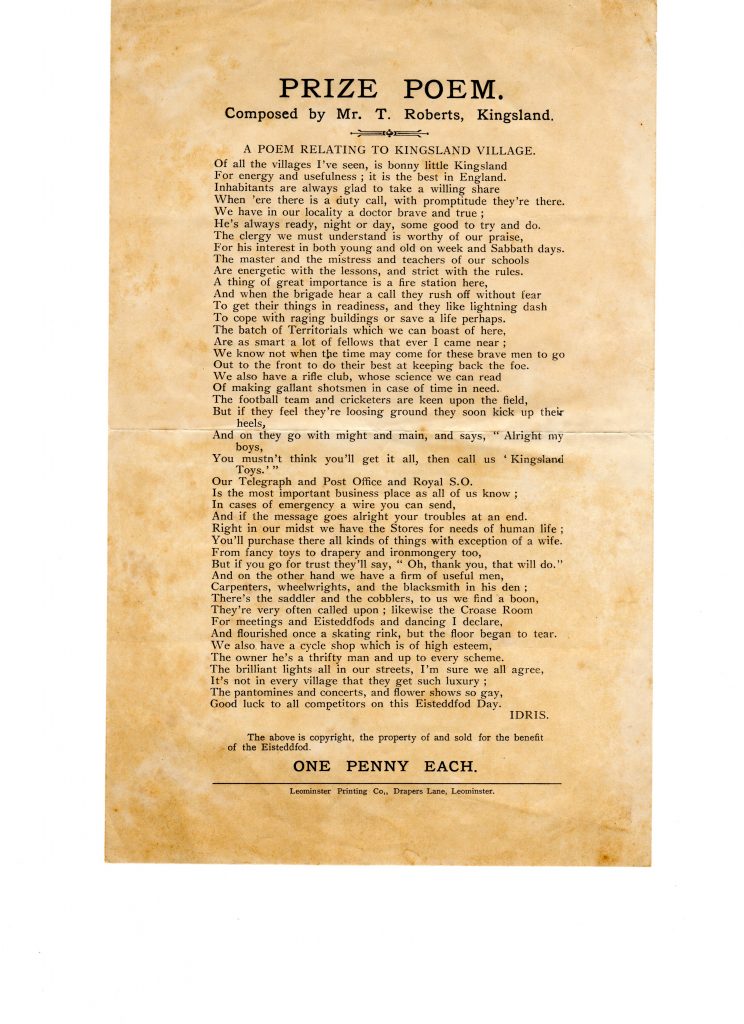 – Apologies for Everything Omitted in this Brief Summary –